For the second half of my Lent Writing this year I am revisiting the trigger words I have used already, but writing from a different perspective. On 2-20-18  the word was SMOKE. Today I'll use the same word in a different light. 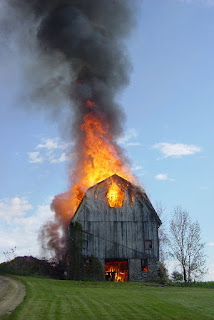 Eli Zook's barn burnt to the ground. I saw pictures of it on my friend Bob's Facebook page. It was exquisitely painful to watch it in its journey from good solid wood to ashes and smoke. Its spirit swirled up toward heaven over passionate flames. It sprang to death out there in Eli's field, it's powdery ashes spilling over Eli's crops. The cows, I hope, escaped the inferno. I suppose they did, or Bob would have told me. 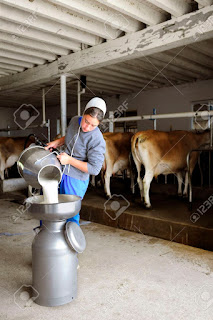 Bob came to visit us tonight, from his home in Lancaster, PA. Eli is Bob's neighbor. And Eli is Bob's friend. It's always a mighty good thing when your neighbor is your friend. 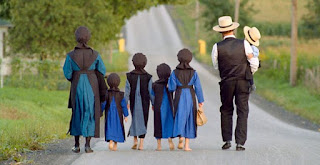 Having grown up in Pennsylvania, I am familiar with Amish country. I've seen first-hand the tidy farms in that piece of God's country, with children dressed in deep blue and black, and men with long beards, crisp white shirts and flat brimmed hats. I've pretended, in quiet secret places in my mind, that I wore the soft cap and apron of a faithful Amish woman, sitting beside my hard working husband in a horse drawn buggy. I've eaten fresh made Shoo Fly pie and peered from the car window paused at the side of the road,  gazing at the rolling fields and the hex signs coloring the beautiful barns of the newer orders of Amish.
"Do the Zooks have electricity?" I asked.
"Oh, no" Bob said, "though, would you believe Fannie has a computerized Bernina sewing machine, which she powers with a 12 volt battery and an inverter? They will not purchase clothing, just large bolts of fabric and thread. And these are Old Order Amish, they don't even use buttons. They will use a straight pin instead. And Eli powers the milking machines for his 63 head of dairy cows with a diesel engine." When Bob popped over to say goodbye, before he came for his visit to Utah this week, Eli was making handles for blacksmith hammers with his air powered lathe, driven by that old diesel engine. Eli wished him well in his travels.

A fistful of years ago Bob was living in Pittsburgh. He read in the Pittsburgh Press about the tragic martyrdom that took place in the one room schoolhouse in Nickel Mines, PA, a village in Bart Township, Lancaster County.  On October 2, 2006, a gunman took hostages in the schoolhouse and shot eight out of ten schoolgirls, aged 6-13, in front of the chalkboard, execution style. Five of the girls died. The shooter turned the gun on himself, taking with him to his death any explanation for the deed.
The tight knit Old Order Amish community united in their grief, and also in their immediate acts of forgiveness and reconciliation. Many of them attended the funerals of the five girls, and also of the shooter. they embraced the shooters wife and children in their own particular sorrow. Within six months the community had torn down the Nickel Mines school and built a new one-room schoolhouse at another location, which they called  New Hope School. The Amish do not believe in insurance. They do believe in supporting each other.
Non-believers criticized the Old Order Amish for their readiness to forgive. But letting go of grudges is a deeply rooted Amish value. This willingness to forgive does not, according to Amish scholars, undo the tragedy or pardon the wrong, "... but rather constitutes a first step toward a future that is more hopeful." (D. Kraybill) 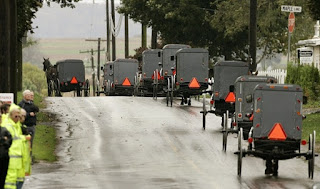 After reading about the community that would unitedly do such a thing, Bob decided he wanted to live there, around that breed of humankind. So he packed up his things and he moved to Bart, PA, two miles from Nickel Mines. He lives in a converted old schoolhouse, which overlooks the fields of Eli Zook. In the morning he wakes to the sound of horse hooves on the road, and Eli's cows in his pasture, and there is peace and quiet and calm.

Except when Eli's barn caught fire, and no one could save it.
But, Bob said, within three days Eli had a brand new barn.There were no insurance estimators. No big construction machines or cranes to lift the frame of the massive two story structure. Instead, there was an army of soldiers clad in black and white and rich, royal blue, a field full of horses, and lumber coming in on flat bed wagons. 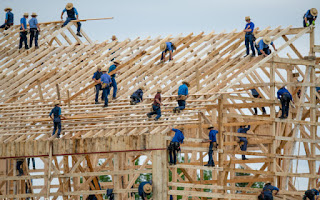 "Three days!" Bob said. "It was Biblical."
One day the source of life for the Zook family went up in smoke. And three days later it rose again. 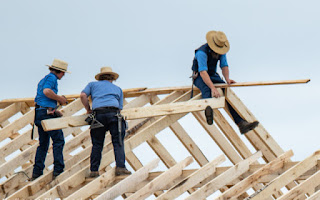 "These are good, solid people," Bob says. "And I don't plan to ever leave them."
Now, every day, twice a day perhaps, Eli fires up his diesel engine and milks his 63 cows on the lower level of that barn. In the upper level, the members of their small community of Old Order Amish worships and sings. And on other days, after school, they set up three volleyball nets, where the kids play the Old Order Amish version of Video games, only they themselves are the players led by God's delighted thumbs.
"Never challenge an Old Order Amish kid to a game of volleyball," Bob says.
"You'll lose." 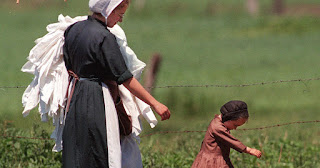 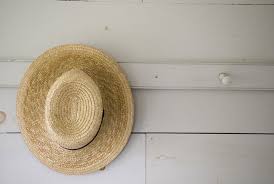 Posted by coriconnors at 1:26 AM

Comments will appear after moderation in order to keep spam out of this blog. Thank you for commenting! 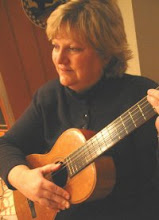 Warps in the Weave